Some people will forever be defined by a single mistake or a case of bad timing. Michael Cimino won a Best Director Oscar for his acclaimed second film, The Deer Hunter in 1978. His next movie, Heaven’s Gate, went down as a creative disaster and one of the biggest box office flops of all time, and studios decided to no longer risk playing Russian roulette with him. Howard Dean’s 2004 presidential campaign has been reduced in our collective mind to “the Dean scream,” in which the flu-stricken candidate briefly channeled Axl Rose while rallying supporters after the Iowa caucus. 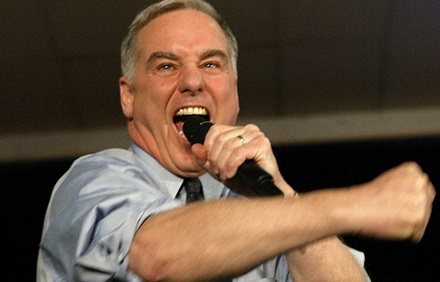 In Iowa, everyone can hear you scream.

Much like Dean, an unfortunately-timed sickness ensured that George Harrison would be eternally dubbed “the quiet Beatle.” Coming down with a 104-degree fever on the band’s first U.S. visit, he understandably skipped out on photo shoots and was less enthused than the others about participating in interviews. Simply by virtue of the American public not “getting to know him” the way they did John, Paul, and Ringo, George’s legacy was firmly set for the rest of his life.

But the truth is, George had already been kind of set up to be the forgotten Beatle. John and Paul were the chief songwriters and de facto leaders of the band, and the man born Richard Starkey’s stage name alone helped him stand out. Plus, George’s vocal spotlights on the early albums were mostly forgettable covers. However, in two instances, John graciously allowed George to take the microphone on Lennon originals that their composer probably considered too lightweight and beneath him. In both cases, though, they wound up being endearing performances in ways that John probably couldn’t have matched.

George’s nasal warble suits “Do You Want to Know a Secret” perfectly, from its dramatic intro to every bouncy note that follows. A simple ditty you can’t help but enjoy, from the very early days before the Beatles ever sang, “Yeah, yeah, [Dean scream].”