America fell in love with the Beatles via the purest of requests in December 1963: “I Want to Hold Your Hand.” But just six months later, they made it clear that that was no longer enough to satisfy their insatiable lust.

Oh. That’s probably ok. As long as we’re talking middle school dance, boys on one side, girls on the other, and one boy finally emerges from a confident punch-induced sugar rush to ask his crush of two years, Amanda, to slow dance to Spandau Ballet’s “True” while he sweats through his oversized rented tuxedo, leaking through the fabric so much that his mom makes him pay for it to get dry cleaned before returning it because she doesn’t want to risk losing the damage deposit but maybe I wouldn’t have sweat so much if the gym was air-conditioned so maybe Principal Minshew should pay the dry cleaning bill, Mom. It’s not fair! I didn’t even want to go to the stupid dance except my history teacher Mr. Young told me I should put myself out there because he’s “seen the way you look at Amanda in class” and he’s like, “you miss 100% of the shots you don’t take,” and I think he’s a genius but I find out a few years later it’s actually an unattributed Wayne Gretzky quote. You are a liar, Mr. Young. You are a freakin’ liar and I hope one day you get what’s coming to you. 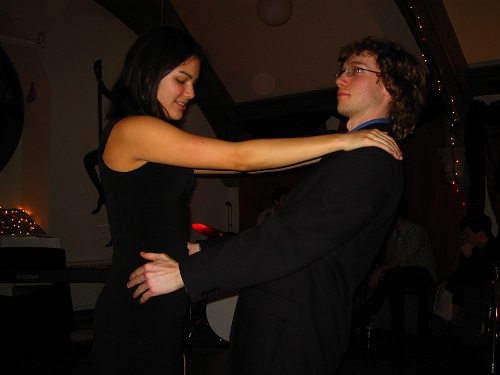 Some details have been changed. For example, Amanda was blonde.

I’ve always loved the energy of this song–on A Hard Day’s Night, it follows the gentle “If I Fell” with an immediate in-your-face vigor that never lets go. The best part is John and Paul’s dramatic backing vocals in the chorus. “Dance with you! Ohhhh!” The songwriting team brushed the song aside–it was written with George’s vocal range in mind, with Paul calling it “pandering”–but as usual, all four Beatles teamed up to make this track much greater than the sum of its parts.